When I was about four years old, my father took my older brothers and me blueberry picking in the wilds of northeastern Pennsylvania. He gave us each a bucket and showed us how to pick the berries and gently place them in the pail without crushing them.

Dad brought me to a small blueberry bush and said I could pick there. Engrossed with having that bush to myself, I didn’t notice everyone scattering in their quest to see who could pick the most. I sat down in the tall, soft grass and began – one berry in the bucket and one in my mouth, over and over.

Suddenly, the “wild” challenged me. I had never heard one before, but I somehow knew it was a rattlesnake – its terrifying rattling right beside me. A surge of adrenalin launched me into the air. My feet hit the ground running in no particular direction except far away from that snake.

Our Feet Were Made For Treading

As I recall that frightful experience, I wonder if an angel helped carry me to safety. God commands His angels to guard us in all our ways, bearing us up, so we don’t even strike our foot against a stone. He made our feet to do mightier things.

“You will tread upon the lion and cobra, The young lion and the serpent you will trample down.” (Psalms 91:13)

When God created Adam and Eve, He gave them dominion over every creature. After the flood, God reminded Noah and his children of their dominion. (Genesis 9:1-2)

The Bible displays numerous accounts of believers triumphing over hostile animals. A young lion attacked Samson, who tore open the wild beast with his bare hands.

David overpowered and killed a lion and a bear.

Benaiah killed a lion in a snowy pit.

God’s angel shut the lions’ mouths, so they did not harm Daniel.

When a deadly viper fastened itself on Paul’s hand, he shook it off into the fire. The natives watched for him to swell up and fall dead suddenly, but Paul was unharmed.

As Christians today, we have Jesus’s promise that signs will follow those who believe on him. Even if we accidentally pick up a serpent as Paul did, it will not hurt us.

The Power in His Name

I’ve never fought with wild beasts, but I vividly remember seeing the power of Christ’s name – even over animals. I was at a backyard barbecue with friends from church. We couldn’t see the neighbor’s dog behind the privacy fence, but its incessant barking was annoying. Without giving it much thought, I said, “In the name of Jesus Christ, be quiet!” The yelping instantly ceased, and we were able to enjoy the barbecue.

I’m ashamed to admit it, but I was surprised at the immediate response to the name of Jesus Christ. I came from a neighborhood where we freely threw around that name like a curse word. Perhaps the Lord used that incident to teach me the power behind His name.

The name of Jesus shouldn’t be thrown around at all, not even as an “abracadabra” incantation. Seven sons of a Jew named Sceva tried that in an exorcism, and it didn’t end well. The evil spirit leaped and overpowered them with such strength that they all fled naked and wounded.

Stop! In The Name Of The Law!

In many movies I watched as a child, the police officer chasing a criminal would shout, “Stop! In the name of the law!” If his name was Harry, he didn’t cry, “Stop! In the name of Harry!” He wasn’t ordering the guy to stop by his authority. In essence, he was saying, “I represent all the authority of the law. If you don’t stop, you will suffer the consequences written in the law.”

As ambassadors for Christ in this world, we represent all the authority of our Lord, the living Word of God.

“He is clothed with a robe dipped in blood, and His name is called The Word of God.” (Revelation 19:13)

It behooves us to seek understanding of the Living Word through the written Word, so we can know the Law we represent, acting and speaking in the name of Jesus Christ.

Our Authority Over Beasts in Christ’s Name

After his resurrection, Jesus declared in Matthew 28:18, “All authority has been given to Me in heaven and on earth.” Our Heavenly Father “seated Him at His right hand in the heavenly places, far above all rule and authority and power and dominion, and every name that is named, not only in this age but also in the one to come. And He put all things in subjection under His feet, and gave Him as head over all things to the church.” (Ephesians 1:20-22)

Jesus said, “These signs will accompany those who have believed: in My name they will cast out demons, they will speak with new tongues; they will pick up serpents, and if they drink any deadly poison, it will not hurt them; they will lay hands on the sick, and they will recover.” (Mark 16:15, 17-18)

We can literally “tread upon the lion and cobra and trample down the young lion and serpent.” Even microscopic beasts must bow at the name of Jesus on the lips of those who believe. We can also speak with authority over lions and serpents in the spiritual realm, which is a topic for another day! 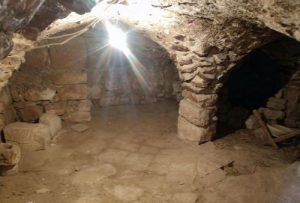